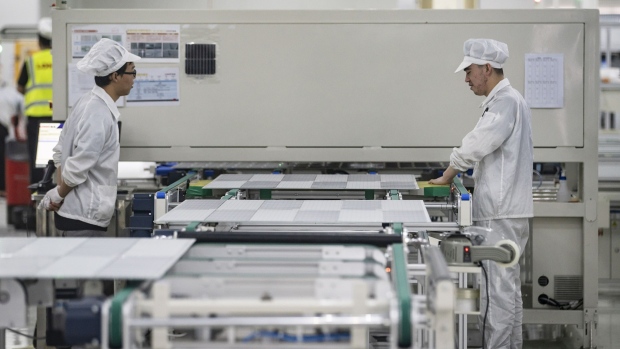 Solar’s growth stumbles just as the world needs it most

Cracks are emerging in the global solar industry, threatening to flatten its growth trajectory just as the world needs clean power more than ever.

The sector is being slammed by a barrage of obstacles, with rising materials costs, forced labor accusations and a worsening trade war all hitting at once. As a result, panel prices are rising for the first time in years, and some manufacturers have asked buyers to delay purchases if they can. And although annual installations are still ticking higher, Wall Street warns the pace of expansion may slow sharply if those hurdles continue unchecked.

“The shocks to the system in the last two to three months are more or less unprecedented,” said Jenny Chase, an analyst with BloombergNEF. “We need to get to net zero as soon as possible, and to do that we just need so much solar and wind. We’re not on track; we need to ramp all this stuff up dramatically.”

These setbacks may only be temporary, with delays in installations expected to be largely resolved by the end of 2022 when new solar factories help ease supply chain issues. But any snag in the sector’s rollout will have lasting effects, with the emissions from the fossil fuels burned instead trapping heat in the atmosphere for decades. Solar provided just 3.3 per cent of the world’s electricity in 2020. BloombergNEF estimates that to be on target for net-zero by 2050, the world needs to add 455 gigawatts of solar every year through 2030. Last year was a record—and it only added 144 gigawatts. The recent stumbles are hitting right before the United Nations’ COP26 climate talks begin later this month, viewed by many as a crucial—and last-ditch—effort to curb global warming.

It was easy to be optimistic about solar coming into the year. Joe Biden’s ascendance to the presidency, China’s 2060 net-zero pledge and Europe’s Green Deal meant that for the first time, all three dominant economies supported an energy transition at the same time. And thanks to decades of painstaking work by researchers and companies, solar can now produce energy cheaper than fossil fuels in most of the world. Even the technology’s Achilles’ heel—the sun doesn’t always shine—was on the way to being solved by improvements in batteries.

Demand has mostly held up its end of the bargain. But the supply chain hasn’t been able to match it. Largely to blame is polysilicon, an ultra-conductive material that’s refined in factories, mostly in China, using caustic chemicals and copious amounts of mostly coal-derived energy. And with demand for panel production so robust, there isn’t enough of it to go around.

As early as January, BOCI Research Ltd. analyst Tony Fei warned that polysilicon factories could only make enough of the material for 170 gigawatts of panels, far less than some of the most bullish estimates were calling for. His call proved prescient, and prices of polysilicon quadrupled from mid-2020 to mid-2021. Now, a power crunch spurred by a shortage of coal has cut supplies of the metal used to make polysilicon, sending prices even higher. Rising steel, aluminum and freight costs are also adding up, and solar panel prices are on track for their first annual price rise since 2013.

Those hurdles are starting to show up in analysts’ forecasts. Guggenheim Securities LLC just removed its buy rating on four solar stocks, citing rising risks to 2022 revenue it says aren’t yet reflected in consensus estimates. Earlier this month, Daiwa Capital Markets lowered its forecast for 2021 installations by 15 gigawatts, more than enough clean energy to power every home in New Jersey, with that capacity delayed until next year. Morgan Stanley and Citigroup have both cautioned about near-term panel demand in China, the world’s biggest solar market, while the U.S. will grow its pace of installations just 3.2 per cent next year after a 58 per cent jump in 2021, says BloombergNEF.

Polysilicon is also at the center of a second controversy. Nearly half the world’s supply is made in Xinjiang, a region in western China facing allegations of forced labor and human rights abuses against the ethnic Uyghur Muslim population there. That hit the solar world in June, when the Biden administration blocked imports of materials made by Hoshine Silicon Industry Co., which supplies feedstock material to several polysilicon makers. U.S. customs agents soon began issuing withhold-release orders (WRO) to detain China-linked solar panels at the border, and the issue hasn’t been resolved in the months since.

“There’s lots of uncertainty in the industry because they do not know how strict the WRO enforcement will be, or currently is,” said Kelsey Goss, research analyst at Wood Mackenzie who specializes in global solar supply chain and technology.

Shortly after the first detainments, a second trade fissure opened between China and the U.S. when a group of unnamed solar companies appealed to the Biden Administration to extend Obama-era anti-dumping tariffs on Chinese solar panels to those made by Chinese-owned firms in Thailand, Malaysia and Vietnam—where the U.S. gets nearly 80 per cent of its panels. The U.S. Department of Commerce has yet to decide whether it will even investigate the appeal, but just the threat of the case has caused some companies to stop sending panels to the U.S., according to the Solar Energy Industries Association trade group.

“This had an immediate chilling effect on the market,” said George Hershman, president of Swinerton Renewable Energy. “Manufacturers started to hold orders immediately.”

China’s five biggest panel makers, which account for around half the world’s supply, last month asked customers in an open letter to delay purchases to avoid supply chain carnage. Now, some U.S. solar construction companies have started sending workers home because there are no panels available, according to Roth Capital Partners.

Of course, it’s not all doom and gloom with solar. Even with the price hikes, solar panels are still cheaper now than they were in October 2018, and installations keep inching higher. New polysilicon factories and an eventual end to China’s power crunch promise to bring prices back down by 2023 at the latest. And even amid all the hubbub, solar companies continued to improve their technology and manufacturing efficiency this year, promising continued cost improvements in the future. Not to mention that solar’s biggest competitor, fossil fuels, are mired in their own supply issues that have sent coal and natural gas prices to record levels.

That’s scant relief, though, for installers like India’s Gautam Das, trying to add solar capacity today. Das, 47, who left his job as head of Treasury products at Citibank India to start solar developer Oorjan Cleantech in 2016, is projecting revenue to grow five-fold this year. But he’s faced a hiccup recently when the price of modules in India jumped by about 20 per cent. The company took hits to its profit on some projects and shared the increased cost with customers on others.

For some developments, he said, there was no choice but to delay installation and hope prices fall in a few months, which is bad news for both the customers and overall emissions.

“As a country, and as an entrepreneur, I believe more solar is better and faster is better,” he said. “But a 20 per cent jump in a month, that’s a big uncertainty and a big hindrance to solar adoption.”